London Fire Brigade has 2 fire boats – Fire Dart and Fire Flash. They are moored at Lambeth river station, and used for more tasks than you might imagine

Firedart is used in daily operation, while Fire Flash is reserved for training exercises and a spare.

Built in 1999 by Northumberland-based shipbuilder Alnmaritec, they are used for a variety of incidents, such as people stranded in the River Thames, fires on boats, crashed boats, and riverside property on fire.

What is a Fire Boat?

A fire engine on the water. Our current fire boats were specially built for London Fire Brigade. They are a class of boat called a ‘Wave Patroller’, and each has a slightly different specification.

Fire Dart and Fire Flash are both fast twin-engined, single-hulled landing crafts. They have been designed with shallow draft – a flat bottom – for use on rivers and inland waterways. Both have a reinforced keel, so we can ‘beach’ the boats on the Thameside and lower our access ramp without harm. 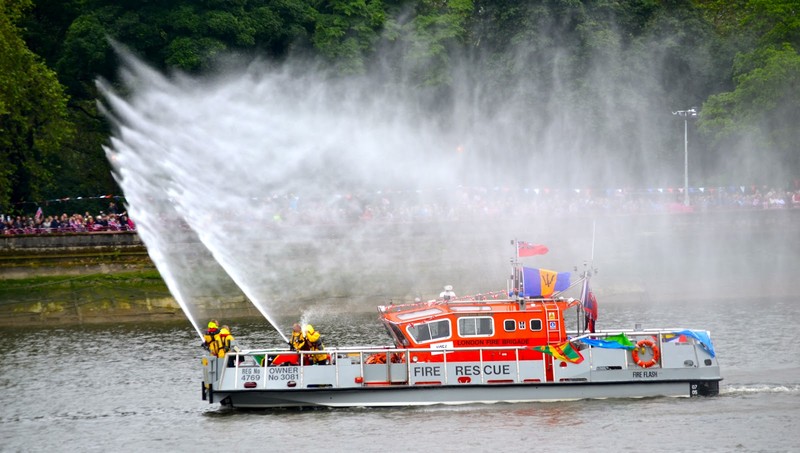 How do we use our fire boats?

Firedart is our ‘workhorse’ while Fire Flash is our reserve. She typically stays alongside in Lambeth, though is always on call if needed.

Duties of our fire boats include putting out fires from the water (on boats and in buildings that face the Thames), rescuing vessels that have got into trouble, towing distressed vessels, and rescuing people and animals from both water and mud.

Our fire boats are also often used during major events – they give us the flexibility of fast movement, and a unique perspective.

How often do the fire boats launch?

Our fire boats launched 147 times in 2017, though it varies from year to year.

Fire Boats from a Firefighter's perspective

”The Fireboat is a really interesting place to work. We get called to all sorts of emergencies on the Thames from people in the water in need of rescue to fires on boats. We have excellent working relationships with our partners on the Thames, including the Police and RNLI and we often exchange information on risks we have identified"

One of our most famous fire boats – the retired Massey Shaw – is credited with saving over 500 lives as one of the ‘little ships’ fleet at Dunkirk. Like our current fire boats, she has a relatively flat hull so was able to get closer to the shore.

This meant many soldiers could wade out and climb aboard, to be ferried to the larger ships. She was the only boat in the fleet make three trips to the beaches, and was crewed by firefighters who volunteered for the dangerous rescue mission.

Learn more about fires and firefighters from the past in our museum history section.

The London Fire Brigade rescues hundreds of creatures every year – from pigs to cats to bearded dragons.

The London Fire Brigade has a number of methods to rescue people from heights. Usually these involve ladders or aerial appliances, but sometimes these are not suitable and we use ropes.